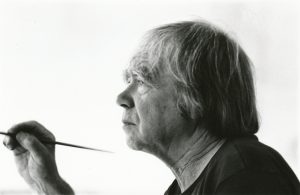 Home › Work › Dance of the dead & temptation of the holy Antonius

Dance of the dead & temptation of the holy Antonius

Similarly, Berke makes the temptation of and the struggle with death an object of a series named “dance of death” that he starts before the second world war even begins. Starting with designs for the Cologne carnival, death in form of a skeleton (sometimes as the main character sometimes in the background) is omnipresent in these works but always depicted in a humorous way.